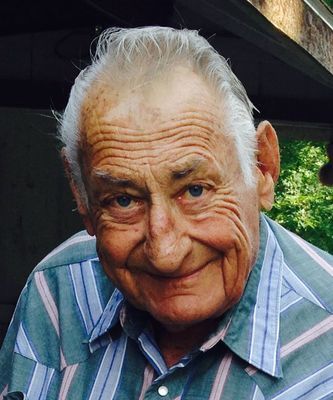 The son of Paul Benjamin and Stella Gladys Corfield Wood was born on March 19, 1930 at Clayton, Illinois.

He was united in marriage to Delores Dykstra at the Canton Christian Church in February 12, 1956 and they celebrated their 60th wedding anniversary with an open house at the Lewis County Nursing Home.

Ben graduated from Clayton High School in 1948. He worked the wheat harvest in Colby, Kansas. He enrolled at Culver-Stockton College in 1948 and was a member of Mu Theta Nu Fraternity. In February of 1951 he joined the U.S. Air Force during the Korean War serving in the medical corps as sergeant. He was assigned as a surgical technician at Eielson Air Force Base in Alaska. After transferring to Walter Reed Medical Center in Washington, D. C. he and three corpsman and four nurses were assigned to the V.I.P. ward reserved for the top military officers and the President of the United States. He was a personal attendant to General Hoyt S. Vandenburg, retired commander of the U. S. Air Force. After receiving an honorable discharge and Letter of Commendation from the Surgeon General of the U.S. Air Force, Ben returned to Culver-Stockton College and graduated with a degree in economics and sociology. He worked as an electronics technician in the oil fields for Haliburton in Salem, Illinois. He then returned to Canton and purchased the Lewis County Hardware and built the Dog-N-Suds drive-in. In 1960 He and his wife, Delores became the 70th established Honda Motorcycle dealer in the U. S. When they sold the Honda franchise back to Honda in 1990 they were the oldest established Honda Motorcycle Dealer in the U.S. During the next years their business was known as Ben’s Recreational Vehicles until 2011.

He was preceded in death by his parents, step-father, Robert Meaders and a sister, Lena Lu Roy.

Burial with military honors by Otto Bruner Post 170 was in Forest Grove Cemetery.

Memorials may be made to the Canton Christian Church or American Heart Association.

Online condolence may be left at www.arnoldsfuneralhome.com