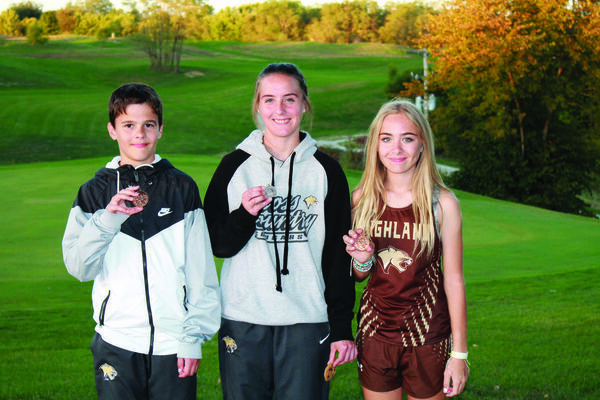 The Highland Cross Country team competed at Elsberry on Sept. 26 Marion County R-II on Sept,27 and Moberly on Sept 29. The CCC XC Conference meet was Oct. 3 in Kahoka at the Twin Lakes golf course.

At the Elsberry Invitation, Highland had 6 runners come home with medals. In the Junior High races, the AJ Caudill finished in 7th place overall and Haleiha Reimers finished 15th. Coach French said, “This was a great race for Highland JH runners. AJ and Haleiha brought home medals and Isaac Roberts just missed a medal but had a time that was improved by over a minute from last year!” In the HS races, Kaycie Stahl continued her outstanding performances by running a PR for the course and medaling in 9th place with a 23:47, which the coaches stated was about a minute and a half faster than any of her previous races at Elsberry. In the boy’s race, Highland had 3 medalists: Ethan Clow (14th – 20:36), Gage Rudd (16th – 20:54), and the Freshman Phenom Nathan Caudill (17th – 21:00). Coach French said, “This was a great team performance for us. Ethan, Gage and Nathan ran as a group through most of the race and were pushing each other to excel. I was super proud!” The HS Boy’s were the only team score for the Cougars and they ended up finishing in 5th place as a team.

Tuesday night, the JH Cougars were scheduled to compete at Marion County R-II, but Highland took some of the varsity runners who had not competed in all meets so far. Seventh graders, AJ Caudill and Haleiha Reimers ran very well and finished 6th and 7th respectively, while Isaac Roberts finished 9th in the JH boy’s race. Ethan Clow was the lone varsity Cougar that medaled and he came away with an 8th place finish and 19:07.

Thursday’s meet at Moberly was a large meet with a lot of large schools competing. The Cougars stepped up though. Junio Kaycie Stahl was the only Cougar to bring home a medal. Stahl finished in 7th place with a time of 22:28, which was a minute faster than her previous best time at Moberly! Coach French said, “Kaycie continues to put in the work and it shows. She is determined to improve and is on the path to another appearance at the State Championships this Fall!” The Cougars had some other great races and times also. Ethan Clow missed a medal by only 14 seconds, while AJ Caudill and Haleiha Reimers were close to medaling also.
Highland also competed in the CCC Conference meet at Kahoka on Monday. Kaycie Stahl continued her dominance; earning a medal in 12th place with a time of 22:35. This earned Stahl 2nd Team – All-Conference Honors. Coach French said, “This is Kaycie’s second year in a row of earning All-Conference honors with a 12th place finish, but this year she ran about a minute faster than she did last year.” Also medaling at the CCC Cross Country meet was 7th grader Haleiha Reimers (8th – 11:48) and Isaac Roberts (9th – 11:12). Coach French said, “Haleiha, AJ, and Isaac all had great races today. AJ unfortunately missed a medal by .4 seconds because they only medaled to 10, but she still ran a great race.” French pointed out that the CCC does not officially recognize the JH as part of the conference, but if they did Haleiha Reimers, AJ Caudill, and Isaac Roberts would have all earned All-Conference Honors as well!
Next up on the schedule for the Cougars is the Brian T. Simpson Invite held at Gans Creek in Columbia this coming Saturday, followed by the Hamburger Meet at Clopton on Monday. Good luck to all the Cougar Cross Country Runners!