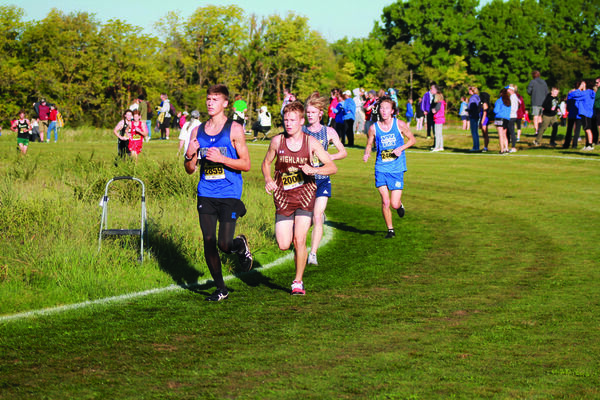 Gage Rudd passing some runners on a curve. 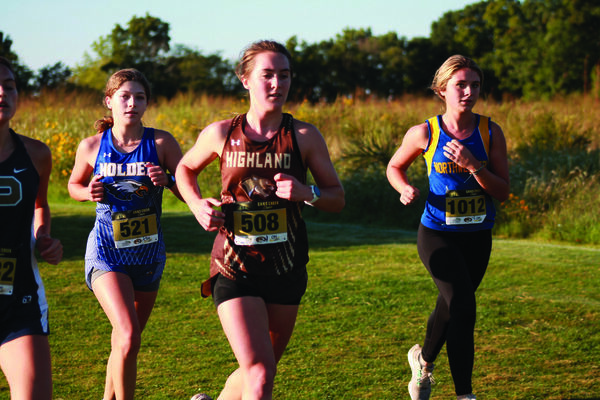 The Highland Cross Country team had to cancel their 12-hour relay, which was scheduled for Saturday, September 17 due to a low number of runners available to participate. Coach French said, “We did still receive some donations and for that the team is thankful!”

On Saturday (9/24), the Varsity squad boarded a bus at 4:45am to compete in the Gans Creek Classic held in Columbia. This is the site of the State Cross Country Championship races held in early November. Coach French said, “We are still not running our full squad, but we did have a couple of runners make their season debut and we also had some excellent races.” French was excited that Junior Kaycie Stahl set a new personal best on the state course with a 22:45 5k race time, which also beat the Lady Cougars best time recorded on the State Championship course to date. “She beat her old PR on this course, which she ran at the State Championship last year by just over 15 seconds!” exclaimed French. Freshman runner, Nathan Caudill, was the top male runner for the Cougars and he crossed the line with a time of 20:58.4. Gage Rudd was 2nd for the Cougars and, like Stahl, improved his time from last year on the course, but by 24.3 seconds. Sophomore Gary Wright was the Cougars 3rd top finisher, with Lucas Honts and Elijah Lewis rounding out the team’s score. Coach French said, “Lucas had the biggest improvement on the day. He actually improved his best time on the course by 5 minutes and 42 seconds!” Senior Morgan Patton, as well as Elijah Lewis and Gary Wright made their season debuts on Saturday.

Good luck to the Cougar Cross Country Runners this week as they have a busy schedule. On Monday, the Varsity and JH Cougars head to Elsberry to compete. Tuesday the JH team and some of the HS runners who have not competed in all of the meets so far will compete at Marion County R-II. Then the Cross Country team will travel to Moberly on Thursday.