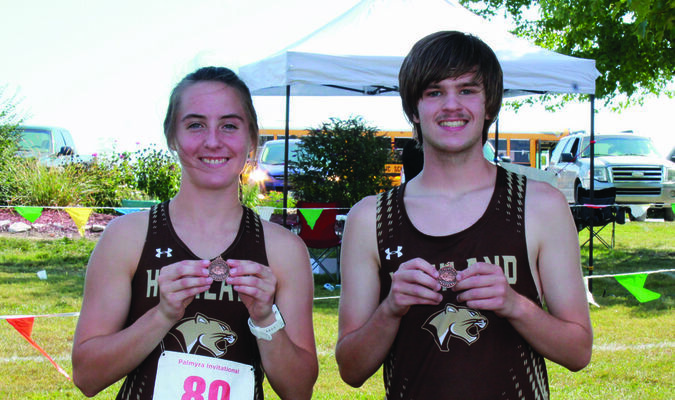 Kaycie Stahl and Ethan Clow with their medals from Palmyra 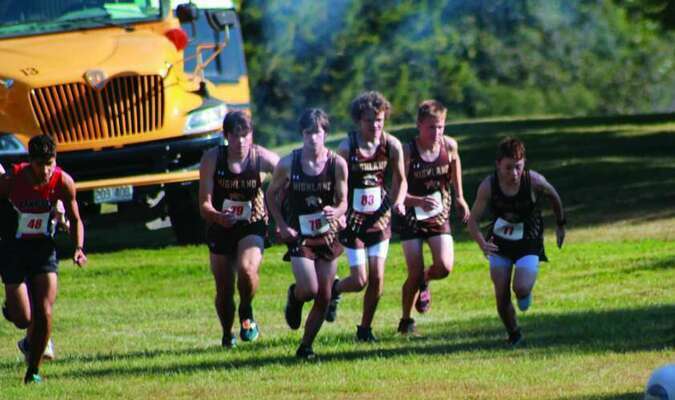 Varsity Boys at the start of the race in Palmyra 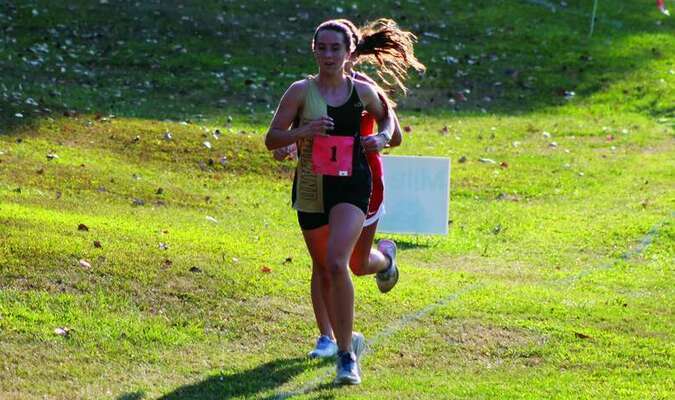 Kaycie Stahl leading all runners around the 1 mile mark at Highland.
Previous Next

The Highland Cross Country Team hosted their seventh Annual Highland Cougar Charge Cross Country meet at the River Valley Community Golf Course in Canton, Missouri on September 6, 2022. As this was the first competition of the season for many teams, Highland was missing several competitors due to not enough practices; however, the Cougars that did compete all brought home medals for their outstanding performances.

AJ Caudill (7th grade) ran her first official cross country race for the JH Lady Cougars and earned a medal by finishing in 8th place overall with a time of 20:11 for a 2 mile course. The Varsity Girls race followed and Highland’s lone competitor, Kaycie Stahl (11th grade), won the race with a time of 24:10.6 on the 3.1 mile course. Coach French said, “Kaycie has been working super hard and is driven to excel. This was her race and she improved from a 2nd place finish last year to 1st place and improved her time by just over a minute!” The Varsity Boys race concluded the meet and Highland had 3 competitors running for the Cougars. Ethan Clow (11th grade) is in his first year with the team and finished in 6th place with a time of 21:42.7. Nathan Caudill (9th grade) finished his first High School race in 8th place with a time of 23:37.9. Gage Rudd (11th) finished in 11th place with a time of 24:37.9. Coach French said, “It was a great day for the Cougars Cross Country team. All of our runners medaled and the meet went off without a hitch. We want to say Thank You to the River Valley Community Golf Course for allowing us to host our meet here each year. It is a beautiful golf course and the schools love the site!”

Saturday, 9/10/22, the Cougar Cross Country team headed to Palmyra for the Palmyra Invitational. Coach French was excited that Highland came away with 2 medalists and 3 more that just narrowly missed medals. AJ Caudill (17th) finished just 2 spots away from a medal in the JH girls race with a 1.5 mile time of 13:17.5. Haleiha Reimers (7th grade) ran her first race as a cougar and finished with a 15:31.2. Coach French said, “Both girls did really well. AJ just missed a medal and Haleiha was running her first race and went out a little to fast in the beginning, but she fought through it and finished strong!” In the Varsity Girls race, Kaycie Stahl medaled and finished 5th overall with a time of 23:41.7, which was “almost a minute and half faster than her time on this course last season,” Coach French continued, “Kaycie is working to secure her trip back to the State Championships this year and at this pace, she is sure to do just that!” The Varsity Boys race included 5 runners from Highland, so the Cougars did qualify for the team competition. Highland finished in 6th place overall as a team, just behind the Palmyra team. Ethan Clow (20:58.3) was again the top Highland finisher and medaled in 18th place. Freshman Nathan Caudill (21:56.5) finished just out of medal contention in 29th. Gage Rudd (23:44), Gary Wright (28:36) and Lucas Honts (28:48) rounded out the Cougar team.

Coach French said, “It was a good day for the Highland Cross Country team. First, we competed well and saw more competitors in Brown and Gold. After the races, though, we headed to Lewistown, where the team worked the BINGO tent at the Lewistown Business Appreciation festival. We had a good time and were extremely happy to be a part of the community event!” All three coaches (John French, Janet French, and Susie Meyer), as well as team members (Nathan Caudill, AJ Caudill, Elijah Lewis, Gage Rudd, and Carlie Davis) plus Lindsay Caudill and her kids helped run the BINGO tent.

Next up for the Cougars Cross Country team – the 12 Hour Relay fundraiser event. Next Saturday, Septmeber 17, the team will spend the night at the track taking turns running a mile at a time for 12 hours straight to raise money for the Cross Country program. The team will be seeking donations for each mile they accumulate during the 12 hours, but flat donations are welcomed also. Anyone wishing to donate to the team can contact a team member or call Mr. French at 573-209-3217.