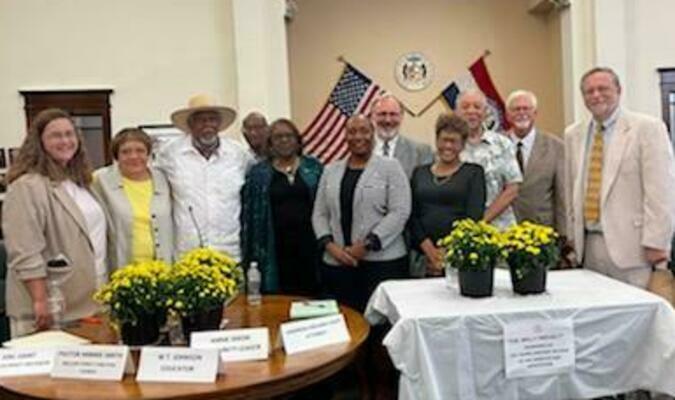 Tenth Circuit Presiding Judge Rachel Bringer Shepherd hosted “The Milly Project,” a continuing legal education program in Hannibal on August 26.  More than fifty people attended the event. “The Milly Project” is a movie produced by the Missouri Bar Association that tells the story of Milly Sawyers, a slave who sued for her freedom three times in Missouri and finally won her freedom in a Circuit Court in Springfield, Missouri in 1836.  Following the movie, a panel discussion was led by several community members, including W.T. Johnson, educator and historian of Palmyra; Charnissa Holliday Scott, who grew up in New London and is now an attorney and Chief of Staff for the Kansas City Public School District; Phil Smith and Pastor Minnie Smith of Willow Street Christian Church in Hannibal; Annie Dixon, a community leader and former president of the Hannibal NAACP; Joel and Faye Dant, who founded the Jim’s Journey Museum in Hannibal;  attorney Terrell Dempsey, who wrote the book “Searching for Jim;” Dr. Patrick Hotle of Culver-Stockton College; and attorney Jim McConnell, a member of the Missouri Bar Board of Governors. Attorney Ashley Moore, a member of the Young Lawyers’ Section of the Missouri Bar, assisted with the event. Attorneys who attended received 3.4 hours of continuing legal education ethics and elimination of bias credit.

More than 400 freedom lawsuits were filed in Missouri courts prior to the Civil War, but freedom lawsuits were terminated by the United States Supreme Court in the Dred Scott decision in 1857.   The panelists discussed many issues, including experiences with segregation, historical incidents of injustice in the court system, jury selection, and the need for love and understanding among people of all ethnic backgrounds. Judge Shepherd said, “I am so thankful to the panel participants and the Missouri Bar for bringing “The Milly Project” to Hannibal. Milly Sawyers reminds us that courts must continue to work diligently to eliminate unjust treatment of court participants.”