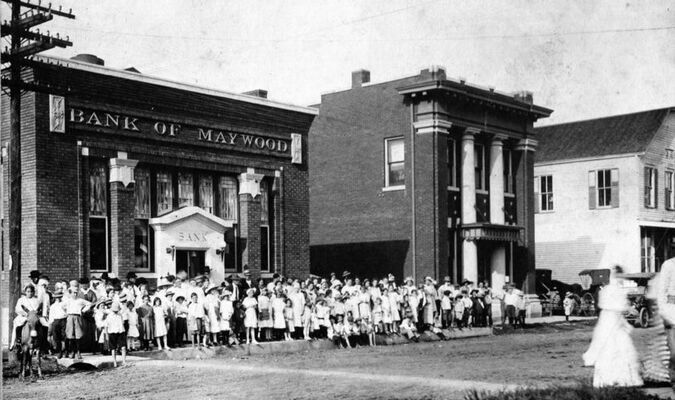 We had another three inches of rain this week. It seems the weather is upside down all over the world with droughts and floods.

I had the best surprise this week. Bill Kaiser’s daughter sent me a picture of the Maywood Bank’s Children’s Day Celebration from 1914. It shows both banks and what I knew as Stout’s Store with buggies and horses in the background. There were so many children in attendance and the girls had on the white dresses that went with Children’s Day. Bill’s grandfather was a board member of the Maywood Bank and had this framed picture. This is a wonderful keepsake for me, and I appreciated it so much.

We were sorry to learn of the death of Karl Speer. He had been ill for some time and was active in the community and friend to many folks.

I was sorry to learn that Sharon Rathbun had another fall and is not well. Mark was sharing a story about his father who had one of the first hay balers in the area. It was a Case Hard tie square baler and the hay crew that went with his dad and the baler were Billy Stanbridge, Bennie DeVerger, Gerald Sykes and Mark’s brother, Ronnie. Not sure I described the machine well, but Maywood had a lot of hay crews of young men even in my time.

We extend get well wishes to Roger Evans as he recovers from a serious fall and needs our prayers for healing.

I had a trip to Barnes in West County this week and was impressed with the complex they have there for different health problems and how big it was. I have been downtown many times and did not realize what a facility they had in the Creve Coeur area.
Remember, ” What I am today helps make others what they will be tomorrow because the influence of good people continues long after they are buried.”