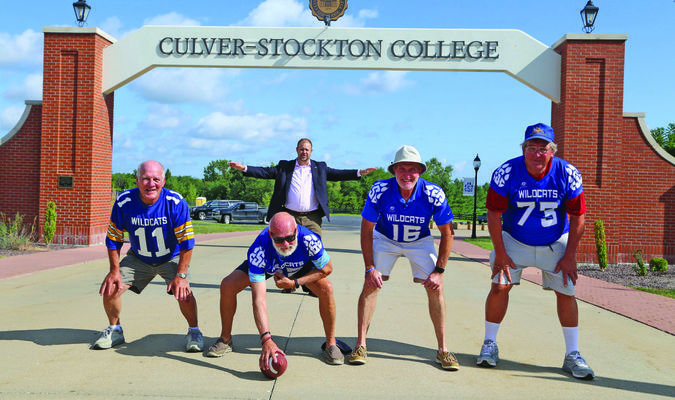 Fifty years ago these four men stepped onto the Culver-Stockton Football field and began a lifelong journey of teamwork and friendship. The men pictured (l-r) are Doug Wilson of Canton, wearing his (11) original jersey, and wearing their number in current Wildcat uniforms loaned for the picture are Pat Hibbler (62) of Quincy, Wes Lukoshus (16) of Indiana and Dick Samples (73) of Jacksonville. Culver-Stockton President Dr. Douglas Palmer stands behind the players doing his best Peyton Manning impression. The four men got together to celebrate 50 years since they firs played their first inter-squad game in August of 1970 at Culver-Stockton. Wilson started as quarterback five games into the season and was starting quarterback over the next four years. Several of the other guys also started that year as freshmen and remained starters throughout their college career at Culver-Stockton. All of the men went on to have successful careers and are productive members of their communities. Wilson is well known in the area as an educator and coach. He taught and was head football coach at Highland for several years and continues to substitute teach. Another member of that team, Tom Claxton, was unable to attend due to a current health condition and the team members are asking the community to remember Tom in their thoughts and prayers. The former players had lunch at Primo’s, which was the Grand Leader in their college days, talked about the glory days of their football careers and remembered friends that could not be with them. Wilson said it was an honor to reconnect in person with his former teammates and remember their college days and continue their lifelong bond.