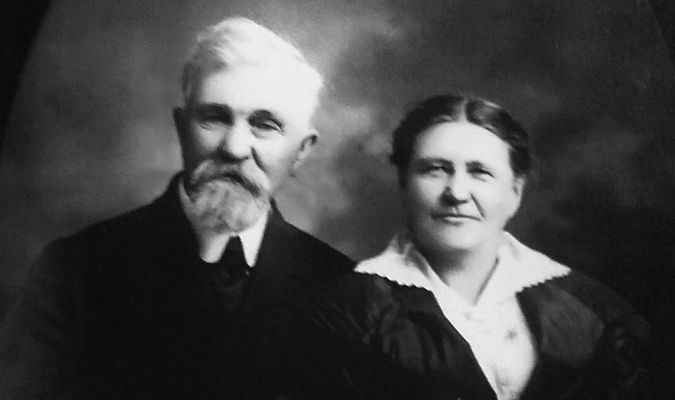 This photograph dated March 29, 1919 is of Deames and Sara Martha Leach, who made their home and living on a farm near Mt. Sinai Church south of Durham (in Marion county). Deames (also called Daniel) was the oldest of a family of 9 children of Elias and Francis Jane Leach, born in Virginia on May 17, 1840.  He came to Missouri with his parents when he was four years old.  Sara Martha, usually called "Mattie" was born on February 5, 1859. She was the oldest of 11 children of Bushrod and Nancy Whitaker of Gilead, Missouri (near Ewing).   Deames first married a Miss Nann (Nancy) Dennis during the Civil War, and they had one child, named Daniel Westley, who died in infancy.  Deames' first wife died on Christmas day in 1877.  Deames and Sarah Martha married on Sept. 3, 1879.  The couple had 7 children:  Murtal Bush, (died in early childhood),  Ola Coleman (married Delbert Brown), Rhoda Bell (married Jake Heavenridge), Ethel Mae (married Dias Hadfield), Etta Capitola (married Johnnie Andrews), Ruth "Mabel" (married Ralph Ward), Lawrence Lester (married Jacie Shackleford).

Both Deames and Sara Martha were united with the Baptist Church in the early parts of their lives and in 1901 they became members of the Mt Sinai Christian Church where they were both active members.

Deames' health began to fail the last year of his life.  The last 4 weeks, his health rapidly declined and he died on November 26, 1921 in Blessing Hospital, in Quincy, IL.  Sarah Martha passed away in the home of her daughter, Rhoda Bell Heavenridge in Quincy, Illinois on December 2, 1936.

Deames and Sara Martha Leach are buried in the Durham Cemetery. Photo and information provided by Glenn Chipman