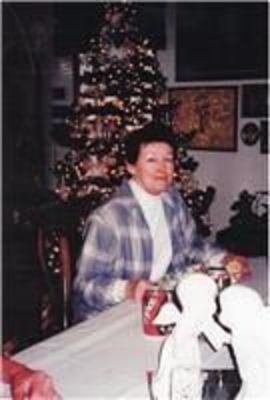 Mary Ann Haines was born September 22, 1935 in Canton, Missouri to Marvin and Frances Marks. She passed away peacefully at home December 6, 2019 surrounded by her loving family. She married Jack Allen Haines April 4, 1953 in Monticello, Missouri. They spent 57 years together.

Mary Ann and Jack came to Yuma in 1964 and she worked first at ASCS in Bookkeeping and later for SkyView Cooling until she retired in 2001. She and Jack enjoyed desert camping, traveling and finally spending their summers in the white mountains of Arizona. She was a wonderful daughter, sister, wife, mother, and friend. She was a very special lady and will be greatly missed, and, as she always said "Oh well, that's the way it goes.”
Mary Ann is survived by their children; Jeff (Patty), Jackie Ann (Richard) Beach and Mark; grandsons, Jesse (Jamie), Joe (Shandy), Jake (Kirby) Haines, Josh (Christine), Justin (Kristal) and Jeremy (Melissa) Beach; granddaughter Samantha (Cory) Seward, 15 great-grandchildren, sister, Ginger Martin, Brother, Jim (Judi) Marks, sister-in-law Sally McChristy and many nieces and nephews.
She is preceded in death by her husband, Jack, her parents and her granddaughter Jaclyn.