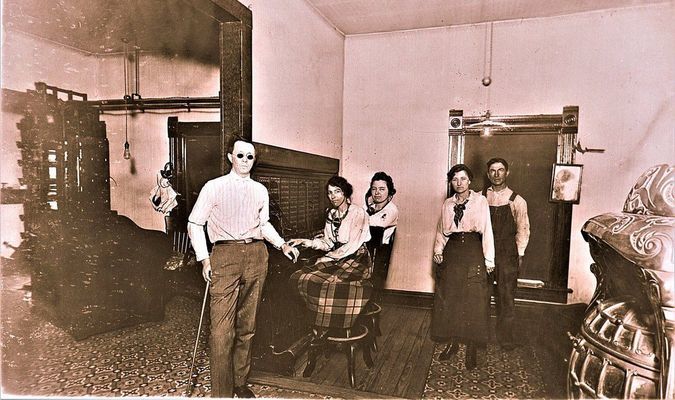 A reader recently sent in more information about this photo that was originally submitted by Glen Chipman. Pictured is the first telephone office in La Belle. The man standing in front is Gran Kendrick, the person who operated the telephone company for years. The lady at the switchboard with the plaid skirt is Flo Vice, the other is Annie Vice.

In the late 1880s LaBelle was establishing telephone lines from places of business to private homes. At this time they would have been in awe to know we call around the world and the main problem we have is figuring out the time zones. Connections world wide are still a mystery as to the clarity of the voices.

An early LaBelle historian noted that the first private telephone lines was from above Smith’s Bank on the north side of State Street to Mr. Alex Smith’s Home. The 1880s picture of the LaBelle Savings Bank in the banking section shows massive lines to a pole close to the upstairs floor. Dr. McKim had established connection between his drug store and residency by July 1888, also a telephone line had been put up between Baker Brothers Livery stable and Lamb and Schork’s Barber shop.
By 1896 the local newspaper wrote about telephone lines to neighboring towns and the eventual goal of connection with Quincy. The newspaper article reads” If the present telephone talk does not end in smoke LaBelle will soon be connected with several neighboring towns, including Quincy, by telephone. The line from LaBelle to Williamstown is an assured fact and will put us in communication with all towns in the county. If the proposed line from Newark to Quincy materializes we can “hello” to our heart’s content.

The LaBelle Telephone Exchange advertised in the 1897 County Atlas. The City Council Minutes of March 4, 1897 reported voting to sell and grant a franchise to conduct and maintain a telephone exchange in the city of LaBelle.

The intriguing factor of the LaBelle Telephone Exchange being managed for so many years by Mr. Gran Kendrick, is that he accomplished this pioneer business for LaBelle while blind. The town lines were in one location while the country lines were in a separate building. The complications of installation, expansion and maintenance must have been awesome. It was a true accomplishment for this blind gentleman.

Gran’s Kendrick’s courage and determination is evident in that three days after a shooting accident while hunting, he was out of bad. During the first year after his blindness he tried to continue his farming and make life as easy as possible for his wife and small daughter.

One evening as the little family gathered around the kerosene lamp in the living room, while Mrs. Kendrick was helping their little girl with her lessons a knock came at the door. T. J. Wright, who with four other men had been managing the La Belle Telephone Company, was admitted. He immediately revealed the purpose of his visit. They were visiting to offer Gran Kendrick the sale of the telephone company!

After several days of family discussion and talking to a second banker he decided to go for it. The blind Gran Kendrick who had never seen the switchboard, made a success of the business and in a few years built the company from a single exchange at La Belle into an organization that operated exchanges in three neighboring towns.

Kendrick worked regularly ten hours a day, 7 a.m. to 6 p.m. operating the board and superintending all the exchanges. Every detail of attending to the organization came under his personal surveillance. It was not an uncommon sight to see him perched at the top of a telephone pole assisting in line work.

He’d say that climbing was as hard as it was when he had the use of his eyes. Height means nothing when the eyes aren’t registering fear to our inner mechanism. It was a matter of summoning some extra courage and he’d feel as safe at the top of a pole as he did on the ground.

Granville Kendrick had been too busy all the years to learn the Braille system of reading, so he enjoyed his leisure hours at his radio. He never was able to see the telephone lines overlooking the town’s main street or array of holes into which he punched the little plugs that connected the lines for conversation.

Guy Thorne was the next to manage the La Belle Telephone System in the mid 1950s. It was then housed on the south side of State Street pretty well across from the first location many years before. Mr. Thorne was operating the telephone company when the dial system came in 1958.