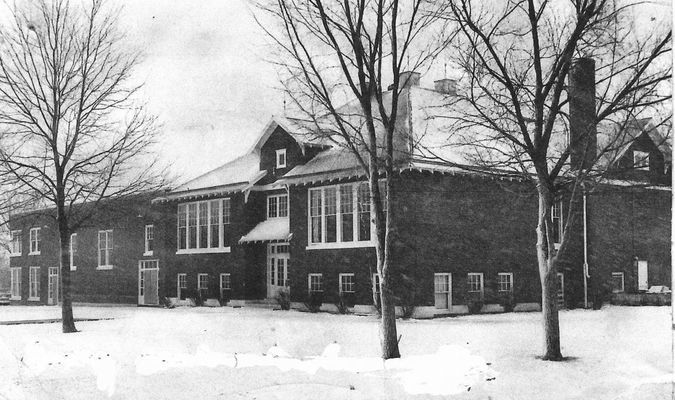 This photograph, taken in 1955, shows the Ewing School. Glenn Chipman provided the photo and the following comments. The original part of the building (right side of photo, west side), was completed in 1925. In the autumn of 1946 an addition of a new gymnasium and four more classrooms was finished on the east side (left in photo). After this photo was taken, in 1957, another addition, with more classrooms, was added onto the west side of the building. In December, 1962, the Durham school was destroyed by fire and those children were accommodated at the Ewing school by dividing classrooms by curtains and moving things around. Soon, it was decided to make another addition to the Ewing building. This time the addition was to the front of, or the north side of the building and it included yet four more classrooms and two additional restrooms, and a hallway to connect everything. Many people, including myself, will remember how the building was when they attended school there. The one thing I think of most of that building, which incidentally was a part of the original building, is the wooden banister that ran up alongside the main stairs going to the second floor, and then, it went onto the third floor, that , and also the very good people who were our teachers, I believe we were all very fortunate.