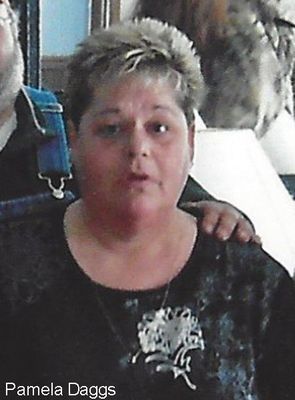 She was born December 27, 1955 in Keokuk, Iowa, the daughter of Vic and Thelma Azinger Riddle. On April 21, 1984 she married Matthew Daggs in Keokuk. He survives.

Pamela graduated from Keokuk High School with the Class of 1974. She had been employed by several area businesses through the years, including Midway Convenience Store and the Lewis County Nursing Hom , Coil Manufacturing and Canton Piccadilly, all in Canton and most recently at Lowe’s in Quincy, IL as an assistant manager.

Pamela enjoyed all types of crafts, going to flea markets and yard sales and camping. She loved to read, especially mysteries and her favorite author was James Patterson. She kept her mind sharp by working crossword puzzles and word searches.

Graveside service will be held at 1 p.m., April 19 at the Montrose Cemetery in Montrose, IA with Pastor Mike Shea officiating.

Visitation will be held after 1 p.m., April 18 at the Vigen Memorial Home in Keokuk, IA with family meeting with friends from 6-8 p.m..

Memorials may be made to the family.

Online condolences may be left for the family at www.vigenmemorialhome.com